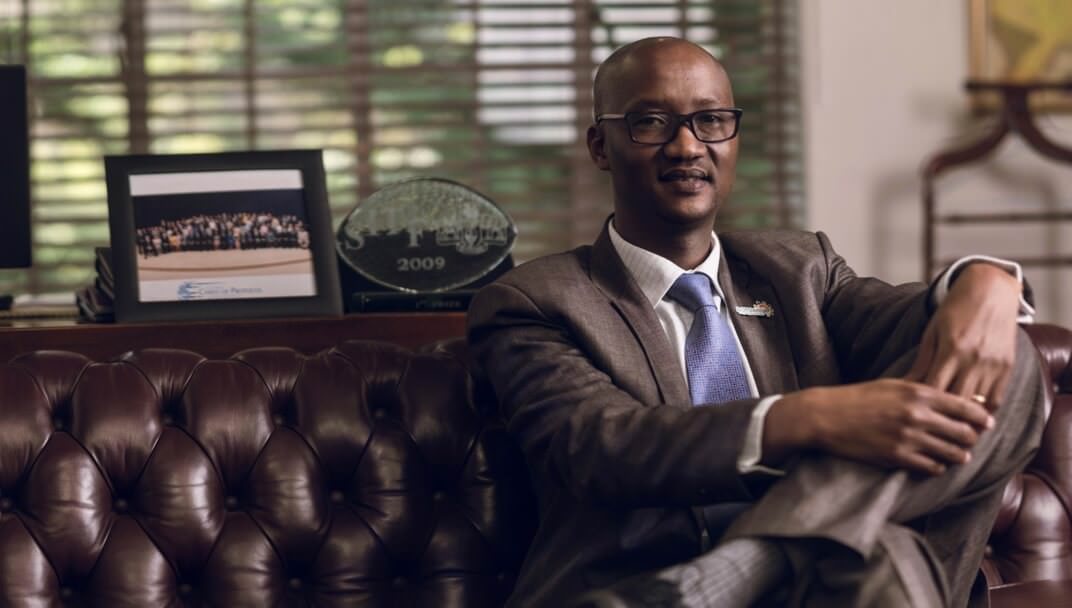 There is a strong sense of community within the Southern African region. A bond exists within this handful of nations that is encouraged through not only the rule of law but also due to the establishment of a number of international trade unions and developmental bodies and organisations. Botswana sits at the centre of this community and has leadership positions and a strong governing presence within these multinational bodies. We sat down with His Excellency Zenene Sinombe, High Commissioner of the Republic of Botswana in South Africa, to nd out more about Botswana and its role in the southern Africa region.

Your Excellency, could you kindly share with our readers your experience serving as the current High Commissioner of Botswana in South Africa?

Commissioner for an envoy in South Africa is simply thrilling. Thrilling, because, as you know, South Africa is a very strategic partner to the southern African region. it has been such a great pleasure, on my first ambassadorial duty, to be sent to a country which is of strategic importance to Botswana. When the SADC (Southern African Development Community) was formed back in the day, it was formed to reduce dependence. Since 1994, we are happy in the SADC to be working with South Africa, because South Africa is now emancipated. We are working together on many fronts. On a bilateral level, we have 40 agreements between the two countries; on a sub-regional level, with the Southern African Customs Union (SACU), we are working together on customary issues; and then at the SADC level we work together with a bigger group including the SACU member states. So it has really been a great pleasure to be working with South Africa in implementing the agenda of the SADC – which is industrialisation and the implementation of the Regional indicative Strategy Development Program. We work with South Africa on SACU matters for the development of the region, and most importantly on a bilateral level to implement those 40 agreements for the mutual bene ts of our people.

Being a member of the SADC, and being posted to a neighbouring country, what are the immediate tasks you face as a diplomat?

you are asking this question at the right moment. Botswana is the current chair of the SADC, and naturally, therefore, I am the chairman of the group of SADC ambassadors in South Africa. That gives me the opportunity to share the efforts that we are doing in these 12 months of chairpersonship, as a country, to propel the agenda of the SADC forward. As I mentioned earlier, we concentrate on issues of regional industrialisation. if you read any literature on integration and industrialisation in Africa, South Africa is probably the most advanced. Other countries still have a lot of room for improvement, so this is one agenda that my head of state is running with, and therefore as a High Commissioner representing him in South Africa, I am also running with it. And I’m happy to be getting the support of other SADC ambassadors. Botswana, so far, has hosted a number of workshops and ministerial conferences, meant for and addressing key challenges in the region. We talk about poverty and food security, about energy and water issues, about illegal wildlife issues. These are just some of the conferences that have been going on. Of course, there are other issues like ministerial issues, trade and finance, and so on, all meant to push the agenda of the SADC forward.

Botswana is celebrating 50 years of independence this year. As it was with much of the African continent, your country experienced a long period of colonial rule. Five decades later, how do you position Botswana as an African democracy?

50 years of independence brings so much joy to me. We believe strongly that as a country, we have a lot to sell – not only to the southern region but to the rest of the continent as well, and to the world. in terms of how we have been able to achieve social economic development in these 50 years, in our own modest way, we have four main pillars. These are the issues of self-reliance; the principle of development; the principle of adherence to the rule of law; and the principle of Butu – Butu meaning humility. These are some of the tenants which we use in our interactions with our near neighbourhood, some of the issues that we want to share with the rest of the African continent – issues that have made us who we are as a country. At independence in 1966, we only had a handful of schools, only 6 km of tarred road, you had to walk hundreds of kilometres to access the nearest health post. if you look 50 years down the line at what Botswana has achieved – if you look at our GDP, at the National reserves, if you look at the infrastructure development, the level of education, if you look at infrastructure development pertaining to the health sector – we have really done a lot. I think it is important that we’re etc. BaTswana, themselves, as a people, have to ask questions about how they became independent in order to deal with the development of the nation.

As a country with a small population, what are the areas of economic development that the Botswana authority has prioritised to make a competitive economy?

The issue of a small population is a non-issue. it is a non-issue for the simple reason that we belong to SACU. SACU is a customs union – meaning that if you move goods from South Africa to Botswana you do not need to pay Levies, there’s no excess duty – so we are one market. Secondly, we have the SADC group, which has over 200 million citizens. Really the issue of Botswana and a population of 2.2 million people is a non-issue because we are operating within the broader community, operating with other countries to cover a larger population.

Botswana competes with its immediate neighbours in the tourism industry, what would you say in favour of your country to attract more visitors? What are its hidden treasures?

We are all in the same region, and I know, for example, that tourists who come from Europe and America want to go to Cape Town, then from Cape Town they want to go to Namibia, to visit places like Swakopmund and the Namib desert, from Namibia they want to go to Botswana to see the Okavango Delta or the Makgadikgadi fields, or to go to some of our national game reserves around the country to see the different flavours that we offer. It does not make sense for a tourist from overseas to come to the Okavango Delta and then y out back home, to then come back after a few months to see the Victoria falls, then go back home again before coming back to Cape Town. We as friends in the region need to package our offers together.

Reportedly, Botswana has the lowest levels of corruption in Africa. How has your country achieved such status?

I made mention of certain principles earlier: self-reliance, development, adherence to the rule of law, and the principle of Butu. Those principles come from pre-independence, and those principles brought us together as a nation. I think adherence to the rule of law is very, very critical. Corruption is cancer that can very easily spread and it is very difficult to beat. We have institutions like the Director of Corruption, whose mandate is to not only quail corruption but also to educate the public about it. We have curricula in schools that speak to issues of corruption, we have the Financial intelligence Agency which monitors what would be a weird movement of monies around the country. So we have been, for, arguably 15 years, the least corrupt country in Africa – according to those indices that have come out each year. And it is not by magic that this has happened, it is through hard work. We also have political leadership that deals with corruption. in the last election when my president campaigned, one of five crucial points was a zero tolerance for corruption, and we really take that issue very seriously. These are some of the issues that after 50 years we as a country should share with the rest of the continent. We also do it at a bilateral level and offer our brother and sister countries the opportunity to come and have a look at how the legislation deals with those people that have been found or alleged to have been involved in some sort of corrupt practices.

Should one travel to Botswana, one will notice growth. What is your country’s development plan for the next 50 years?

We have had a vision for the country called Vision 2016. We are currently evaluating Vision 2016 to see where there is room for improvement. The president has just launched Vision 2036, which will be unveiled during the 50-year anniversary celebrations on the 30th of September. Now, it is important for you to note that we are not just going to throw away Vision 2016 achievements and challenges, you know, dock them and simply have a new vision. We are going to build on Vision 2016. Vision 2016 talks about those issues that I mentioned, in an educated and informed nation. Those are some of the visions that we will refine, having learnt from the lessons we picked up having implemented Vision 2016, so that in turn these pillars will help us zero down on issues of creating employment, of eradicating poverty, of fighting corruption in all its manifestations, educating people about HiV (particularly in terms of mother to child transmission), and ensuring that our education system delivers and churns out products that can immediately be plugged into the economy and contribute productively to socio- economic development. By and large, that is what you will see going forward post our big celebration on 30 September 2016.

High commissioner, thank you so much for sharing this valuable information with the readers and viewers of embassy Direct. From embassy Direct, we congratulate Botswana on its 50 years of independence and hope that the next 50 years can be as successful as the previous ones.