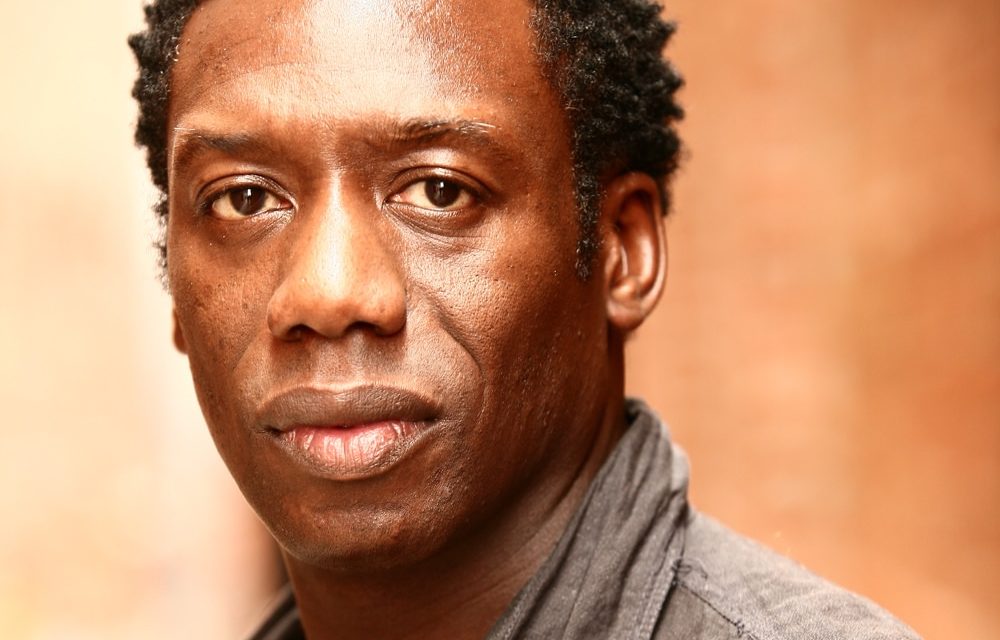 Africa is taking Hollywood by storm. Actors, directors, from all over the continent, including the likes of Djimon Hounsou, South Africans such as Sharlto Copley and Charlize Theron, and from Nigeria David Olowayo, and Idris Elba. We have another African talent with us today, Hakeem Kae-Kazim.

Embassy Direct: Your career started academically in the UK, with a background in Shakespeare. Talk to us about your initiation into the world of drama.

In the UK there was a summer holiday program at the National Youth Theatre. From about the age of 14, every summer holiday I would go for four, five, six weeks to the National Youth Theatre. They take kids from all over the country – some wanted to be actors, directors, some wanted to be stage managers or stage hands. And for four or five weeks we’d get together and put on a production. Towards the end of that, as you grew up in the company, you’d start to do Shakespeare – they would have a big Shakespearean play at the end of the season. I started off doing Shakespeare from there, and ended up doing Othello and Henry V in my last two years. From there, I went to Drama School in Bristol. It was very classical training. After finishing school, I went straight off to the Royal Shakespeare Company and did a wonderful play Richard III and King Lear. We did a world tour. And then I went onto the National Theatre of Great Britain which also did a lot of Shakespeare, so most of my early acting life was spent doing Shakespeare.

You are also a familiar face for TV viewers, appearing in the series’ Criminal Minds, 24 (where you did season 7 and Redemption), and Gotham, another recent TV show. Tell us about your experience in TV?

I love doing TV. For the past few years I’ve been concentrating mainly on television and film, doing shows like Gotham, NCIS, Criminal Minds, Law and Order, the episodic 24, and more recently a TV series which some of your viewers may have seen called Black Sails. I’m working on another TV series called Troy, with BBC and Netflix, which will be coming out probably early next year. I love the TV space, I think it’s very inventive and innovative at the moment and it’s a wonderful space to be working in, creating really interesting work. In terms of stage, I haven’t done that for a while, and maybe I will get back to my roots, but at the moment I’m loving the TV/film space.

Talking about film, such titles as Pirates of the Caribbean, Hotel Rwanda – tell us about that experience?

I was living in South Africa at the time of Hotel Rwanda. I didn’t quite know what it was going to be like, but I remember doing the research and, to my shame, I didn’t know much about the Rwandan situation, having been in South Africa during that period. We were so busy celebrating the South African idea of freedom, that I think a lot of people missed what was going on in Rwanda. So for me, doing the film was fascinating, and doing the research for the film was quite amazing. It turned out to be a fantastic piece of work, to be part of. It was nominated for Oscars, which then helped me get to America. When I got to the States I was asked to do a part in Pirates of the Caribbean. That was very exciting because of the big set, meeting people like Johnny Depp and various others, it was just a wonderful experience having come from South Africa to this huge world stage, it was very exciting. After that I’ve done things like Wolverine with Hugh Jackman, and various others. I’ve just finished a film called 24 hours to Live with Ethan Hawke, which I think will be coming out sometime next year.

Apart from acting, you have produced titles such as Black November with Mickey Rourke and Kim Bassinger.

That was interesting. That came out of the something that we did in Nigeria. I’m very much an activist in a lot of ways, and there had been a massive problem in Nigeria with the exploitation of oil, and it not reaching the communities. It was a wonderful story that we wanted to try and tell, so I booked myself as a producer with other people to try and get this story off the ground. Again, it was an exciting piece. People on the continent have seen it and really like it, and it is a story that really tells this global idea from a very African perspective. That’s also why I like producing, I’m very passionate about trying to tell our story, an African story from a very African perspective. So Black November, things like Man on the Ground, which is about the xenophobic attacks in South Africa. People ask me ‘why do you do these sorts of stories’, they turn out sort of political in undertone, but I think for me I’m excited about telling our story from a very different perspective, from an African perspective.

Within performance, you have also done a lot of voice-over work. You are called the man with a beautiful voice. (Laughs. Thank you very much). Could you tell us more about this, and also about the video game acting you have done?

When I first went over to America, I was asked to get a voice-over agent, which I did. I then got to do a whole bunch of games, like the Halo series, which a lot of younger viewers, especially, will know. I voice a lot of the characters in Halo 1, 2, and 3, and various other big games. As an actor, it is fantastic voicing those games, because you have to get into your character very quickly. I did a lot of that, and recently I’ve been doing animations. I’ve done a whole bunch, the most recent has been How To Train Your Dragon, a TV series based off the film How To Train Your Dragon. Again it’s a great space to be in as an actor, as an artist, it’s a great place to play within and create.

Apart from your performing career, you are involved in humanitarian causes. You are a global ambassador for Africa 2.0, a civil society organisation which provides a platform to emerging and established leaders, in driving forward the transformation of Africa. Share with us your involvement in this organisation, and how you see the role of Africa within globalisation?

My role is really to highlight what African 2.0 is doing, within the continent, and on a global level. 2.0 is really there to try and find an African initiative to African problems, and so it brings together thinkers and shakers, and movers and makers within the continent to try and find an African solution to African problems and African ideas. It is very important, again being from the continent, and understanding where we are as people from the continent, that we must come together to try find our own solutions rather than looking outwards. That’s very much why I’m part of Africa 2.0, it’s really to spread the word and to help initiate an African response to African situations.

I mention Africa taking Hollywood by storm, and you are one of the pioneers in this quest. Please tell us about that experience and the pride you have in being able to stand tall in this difficult industry led by Hollywood?

It is intriguing you say Africa is taking Hollywood by storm. I would come back a little off that, but I think in one sense you are right. There is an interest in Africa from Hollywood; it’s a small one, but there is an interest. I think, for me, it’s really about how I, as an African, go out there and represent Africa as a continent. And then bring that back to encourage people to, again, tell stories from their perspectives and tell them on a world scale, in terms of the artistic content, in terms of the visual content, in terms of the storytelling aspect of the it. It is wonderful being a pioneer but it’s also about being able to come back and share what I’ve done and what I’ve learnt, to try and push the program of us and our storytelling from our side, out there. We have amazing stories which the world still has yet to see, and I think once we start to tell these stories from our perspective, people are going to be very fascinated – because it’s a fascinating and rich and wonderful history that we have on this continent, and a wonderful and unique perspective. So yes, Hollywood is engaged in us but it’s really about us being able to go out and tell our stories – which they will be fascinated by.

As an expatriate in South Africa, share with us your experience living here, and being married to a South African woman. Among your hidden secrets is that you are one of the few that has bungee-jumped off Table Mountain. Could you share that as well?

I came to South African in 1994 when Nelson Mandela had just been elected president. It was a fantastic, amazing, exciting time to be here – full of hope, full of optimism, full of the excitement of a lot of people returning home from all over the world. For me, it was fascinating as a foreigner coming into this space and being able to have a conversation with both sides of the coin, and to listen to different ideas and different debates about what was happening and what was going to happen. The overall thing for me, in my experience, was just a sense of possibility and excitement, a sense of “yes, we’re going to build a better tomorrow”. Creatively, as well, it was a great space to be in – groups were starting to form, Kwaito was a space that was coming in. I produced a film with a very good friend of mine, Akin Omotoso, called God is African and this, again, was about how we is Africans come together and tell our stories from an African perspective. It was a very, very exciting time to be here.

To get to your second question about the bungee jumping, fast forward a few years and I had moved down to Cape Town. I was doing a South African TV series called Mainly for Men. They had basically forced me to climb up table Mountain and threw me out of a cable-car – which is the most horrifying, exciting, exhilarating experience that I’ve ever had. Just the idea of going up on the cable car – they don’t do it anymore, unfortunately – and being strapped to the bungee, just seeing what it looked like. It looked a lot higher than what it was – you’re up on Table Mountain in the cable car, and looking out all you see is this sheer drop of thousands of metres. And I jumped out and screamed all the way down – but it was great (laughs).

Hakeem, to wrap up, what is your message to this generation of African performers seeking opportunity out there?

My message would really be to look inwards and to tell stories from our perspective. Hollywood will come in and find you if it needs to, but I think, first things first, it’s really important to tell your story from an African perspective, to be unique, to be interesting, and to be honest to who you are. And tell your story. Your story.

Again, we wish you the best in the future of your career. I know that you are a hard-working person with a lot of initiative, not only for the industry but for the continent. We thank you for your time