At the heart of Africa, the Central African Republic offers some of the continent’s most breathtaking landscapes. The region encompasses tropical rainforests and desert alike, bordered by Cameroon to the west, Chad to the north, Sudan and South Sudan to the east, and the Democratic Republic of the Congo and Republic of the Congo to the south. Amidst an unstable political climate, Ambassador of the Central African Republic to South Africa, Mr Andre Nzapayeke, offers an insight of hope and optimism towards his country. 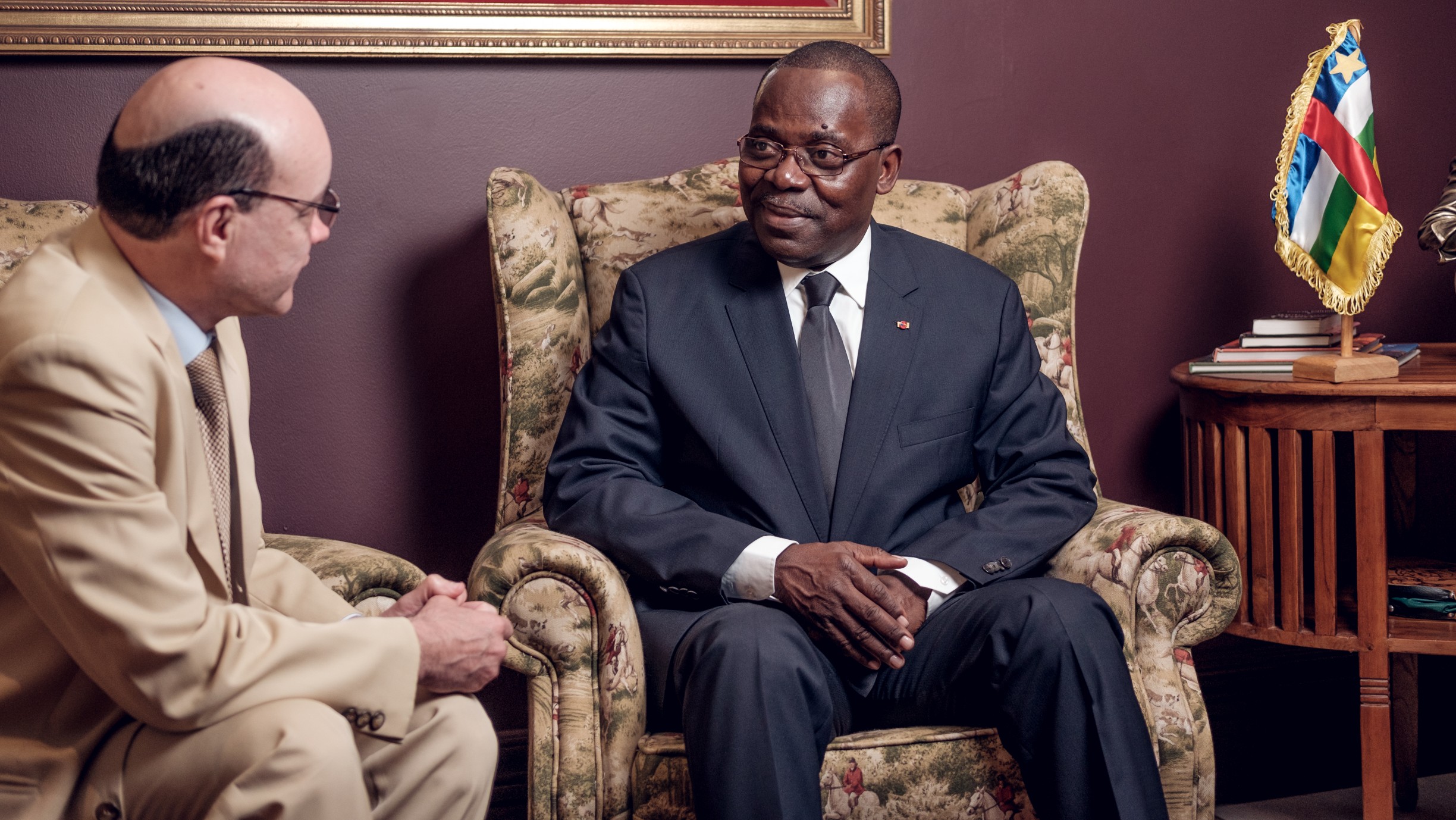 Embassy Direct: Excellency, as Ambassador of the Central African Republic to South Africa, how would you define your diplomatic tour in the region thus far? How long have you been here, and are there moments or events that stand out?

That’s one reason I came here, another is that South Africa is the only African country-member of BRICS (Brazil, Russia, India, China, and South Africa), and South-South cooperation is becoming extremely important. We have experienced cooperation with the West, it will continue to be important, but I think we should look around ourselves, at our neighbours.

Often the role of a diplomat can be somewhat glamourized, when in truth each job has its hardships as well, such as the difficulties involved in relocating and settling down in a country far away from your home. Are you here with your family, how have they adapted and how has their overall stay been thus far?

Have your diplomatic duties required your extended presence in any other African countries prior to being stationed in South Africa? If so, what was that experience like (in relation to your current tour)?

I am not a career diplomat. I am what is called a political diplomat. Prior to coming here, I was Prime Minister in my country. After my resignation, for the sake of peace, I made a choice to come here. I have not been an ambassador before, but I have long experience with the diplomatic society. Before getting into politics, I used to work at the African Development Bank, and I ended up as Executive Director, when it was based in Tunisia.

Through the experience of my international career, I can proudly say that I know over 40 African countries quite well, and I am happy that I got that opportunity. The diplomacy in South Africa is quite developed, there are more than 130 diplomatic missions here. It gives us the opportunity to deal with all countries in the world, and with world issues. Our mission covers 13 countries in total, including South Africa and even New Zealand. It gives us the opportunity to learn, in this case, about Oceania.

Could you elaborate a little on the current state of your home country, the Central African Republic? How would you describe the political, economic, and social stance of the country?

In the past few years my country has gone through difficult times. We have had civil war recently – some try blame it on religious conflict, but that was not the case. It was civil war between different communities, and the State became a mediator. Effort has been made, along with the assistance of the international community, towards getting out of trouble. We had a transitional government from 2013 to 2015, and were able to organize elections. The result was accepted by everybody, and now we have a new president, inaugurated on 30 March 2016. All-new institutions are in place – new Parliament, new courts. We are working towards sustainable peace, now – reconciliation is a priority for my country.

Our president has been campaigning across the world, seeking international support for peacekeeping. He has gone to the United Nations to plead for the lifting of embargoes. Discussions are going on for the disarmament of the rebels, and we are happy with the progress that is being made. Economically, things are picking up. We recently we received a large delegation from the South African Mining Ministry, including the Minister of Mining, to assess the way forward on how to help the country rebuild and restructure its mining economy. CAR is one of the richest countries in Africa, we have lots of mines. Diamonds and gold are like stones in my country; we have uranium, oil, cotton, iron ore. And we have landmass – we are a big country for our population of just 4.7 million people.

A few years back, South Africa had sent military aid to the CAR during times of hardship. Would you say the two countries have strong diplomatic relations, and in what areas would you say bilateral cooperation is stronger?

South Africa is not a foreign country to us, we are closely interlinked. South Africa has also always been present when we needed it. And we thank the nation for that. The military assistance that we got from South Africa, until 2013, was most welcomed. The objective was to help us build our army, to train our people to protect our borders, to build intelligence services. Our weakness in protecting our borders has always been a problem, not only for us but elsewhere in the central African region. It is a very sensitive area. The assistance that we got from South Africa was extremely important. Unfortunately, we suffered in the end when criminals, who came from abroad, created a situation that resulted in the loss of some of our South African brothers and sisters. It is very painful.

As a landlocked country, international trade may be affected. It is reported that the CAR has one of the continents lowest per capita income rates – but this is often attributed to the fact that these ratings and figures are based on export figures, and often ignore the unregistered sale of food, locally produced alcoholic beverages, diamonds, ivory, bush–meat, and traditional medicine. Could you elaborate a little on the state of the formal and informal economies of the CAR?

Before the trouble, our economy was mainly based on agriculture, particularly in cotton, coffee, and timber. We still have a traditional, colonial economic system in place, but we have not really innovated a lot since independence. We continue to produce for the Western industry. Diamonds and gold are exported, but we do not process them in the country, which adds value, as some other countries such as Botswana do. We are learning from Southern Africa.

A South African company is doing prospections in the south west of CAR, the prospects are favourable. Since 2013, there has been a big problem with security, in general. We are highly dependent on exports and imports, and being a landlocked country, as you mentioned, became a problem. The road from the sea-port in Cameroon was difficult to use. Still, we manage to survive. 80% of our population lives off local produce. One problem we don’t have is access to land – every Central African has a right to land. Land is not occupied, it belongs to the State but the State leaves it to the people to use. This access to land gives possibility to the people to continue practicing agriculture.

Central to the African continent, the landscape and environment of the CAR is often described as breathtakingly beautiful. What would you say are some of the highlights of your country, and what would attract foreign visitors and tourists?

Central African Republic is a very beautiful country. Geographically, we have three different climates. In the southern parts, we have huge Equatorial rainforests, part of the Congo Basin. In the center we have the tropical Savanah region, and in the north you find the dried Savanah region, nearing the Sahal type of landscape, inhabited by wildlife. You find all kinds of wildlife; we have the biggest elephants. In terms of tourism, we don’t have the type of tourism that South Africa has. We don’t have many luxury hotels. I often joke with my South African friends when they talk about their wild animals. I tell them your animals are not wild – they have birth certificates and an address, they have an adopter that takes care of them, they have names and you know their age (laughs). We do not know our lions’ names – they are in the wild. In the south-west of the country we have forest regions that South Africans visit often, to see forest gorillas, elephants, and bongos (forest antelope) – we have millions of bongos. I’m happy to see that South Africans are also becoming more interested in starting game parks in my country. We are working on our issues of peace, to give this opportunity to our brothers and sisters of South Africa. This is one of the areas in which we would like to strengthen our bilateral cooperation.

We thank you for your time, Your Excellency, and wish you well for the remainder of your duty here.