Your Excellency, could you briefly elaborate on the historic background of the Vietnamese-South African relation?

The Vietnamese-South African relation can be traced back to 1955, at the Bandung Conference in Indonesia. It was the first time the delegations of the Labour Party of Vietnam and the ANC met, as observers to the conference.

In 1978, a high-level delegation from the ANC, led by President O.R Tambo (including Presidents Thabo Mbeki, Chris Hani, and others), visited Vietnam after it was liberated and reunited following the war against the United States. After this visit, the ANC wrote The Green Book (Report of the Politico-Military Strategy Commission to the ANC National Executive Committee, August 1979), which helped in the fight against apartheid.

Official diplomatic relations between our two countries were established in November 1993, just before South Africa gained democratic independence, and last year, we celebrated 25 years of diplomatic relations. Vietnamese Prime Minister, H.E. Mr. Phan Van Khai, visited South Africa in 2004; and in 2007, President Thabo Mbeki visited Vietnam. They established a comprehensive partnership between the two countries that we now enjoy today. We exchange numerous delegations, and have a healthy, longstanding relationship.

How has your diplomatic and personal experience been thus far as the Ambassador of Vietnam in South Africa?

This is my fourth foreign assignment. My first was in Cambodia, then San Francisco, then Denmark, and now I am here. I love South Africa very much. I try to make use of my presence here to visit various parts of the country. I like South African food, I like the meat. I also like to travel. I’ve been to Limpopo, Durban, Richard’s Bay, and I’ve been to Cape Town several times. The weather is very fine. I’ve also learnt how to play golf since coming to South Africa, and I’ve taken the opportunity to make use of the many beautiful golf courses here as well. 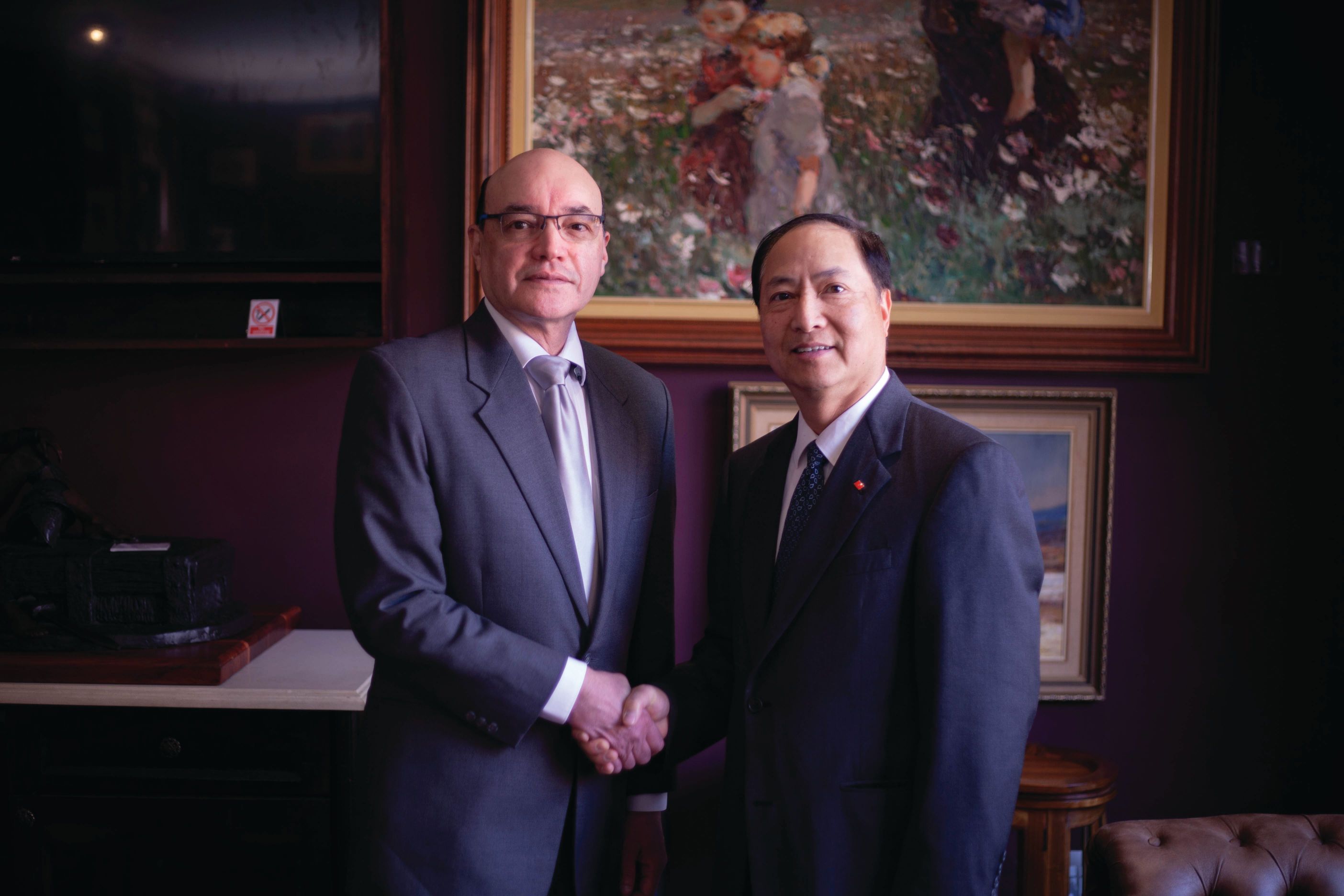 What is the current focus of collaboration between Vietnam and South Africa?

Our relation is of political and diplomatic nature, and includes economics, education, defence, and biodiversity and preservation. We have very good party-to-party and state-to-state cooperation. Recently, in July 2019, a high-level delegation from the Communist Party of Vietnam visited South Africa and met with the ANC top 6, and looked at how to improve the relationship between the two countries.

The political relationship is very good; we are close friends. South Africa and Vietnam cooperate in the attempt to promote peace and stability in the world. We supported South Africa to become a non-permanent member of the United Nations Security Council for the term of 2019/2020, and South Africa supported us to become a non-permanent member for the term 2020/2021. We overlap by a year, so we will cooperate very closely to push the agendas of the United Nations.

The bilateral trade relationship between Vietnam and South Africa is very high, in comparison with the trade we share with other African countries. It is roughly US$1.2 billion in recent years. South Africa is our biggest trading partner in Africa, and we consider it an entry point to the region. We have many business-level trade-promotion delegations, for instance, some of our businesspeople like to attend SAITEX (The South African International Trade Exhibition). We collaborate with the Johannesburg Chamber of Commerce and the Western Cape Chamber of Commerce, and organize seminars and business-matches for people to discover new business opportunities.

When it comes to education and training, we continue to learn a lot from each other. Recently, for example, there were 6 South African students that studied at the Maritime University in Haiphong, Vietnam, with a focus on ship building and maritime engineering. Vietnam, like South Africa, has a long coastline. We continue to explore collaboration when it comes to maritime-biodiversity, -management and -protection. You also have very good English teachers, and we receive more and more South Africans in Vietnam.

How successful have you been in pursuing new cooperation agreements between the two countries?

A number of agreements and MoU’s are being discussed between our governments, and it is my hope that they will be signed within the next year. Among them is an MoU to be signed by the Ministry of Industry and Trade in Vietnam and the Ministry of Mineral Resources and Energy of South Africa, which could boost the export of coal from South Africa to Vietnam, and help reduce the trade deficit.

Vietnam exports US$800 million to South Africa, and we import only US$400 million from you, so the trade deficit is high. South Africa wants to export more fruit to Vietnam. We get pears, grapes, and oranges from you, but you are looking at exporting more products, such as avocadoes and apricots. We export Lychees, and some other fruits to South Africa.

Vietnam has become an important tourist destination for those travelling to South East Asia, particularly concerning its history. What attractions does your country offer?

Some of my South African friends have toured my country, and they love Vietnam. President Cyril Ramaphosa has recently been twice, and he shares that sentiment. He first went with his family as a tourist, and then led a government delegation there in October 2016. At that meeting, he mentioned that his family visit there was his most memorable visit outside of South Africa.

People are fascinated by our history, so these types of visits are popular. They go to Museums, or to Củ Chi in Hồ Chí Minh City, where the Vietcong fought against the USA. Most tourists know of the war between Vietnam and the USA, but there are other parts to our history that are fascinating too.

Many do not know that we were under Chinese domination for over 1000 years, before the French landed in the late 1850’s, and dominated from roughly 1882 until 1945. After World War 2, the Japanese kicked the French out. We were able to liberate ourselves, and President Hồ Chí Minh proclaimed Vietnam’s independence from Japan in 1945.

With the help of Great Britain, the French soon returned, and waged a 9 year war. We attained victory in 1954, which largely led to the collapse of colonialism in North Africa in the 1960’s. As a result of the Geneva Conference of 1954, Vietnam was divided into two. The north was the Democratic Republic of Vietnam, headed by President Hồ Chí Minh. Despite advice not to, America invaded Vietnam, and we had to endure a very brutal, 20 year long war, until we liberated and reunited our country in 1975.

Many people want to know about our modern history, about the war, about how Vietnam won. We are a very small, and materially weak country, in comparison to the hugely developed United States of America, who came to Vietnam. We have spirit; we fought for our country and for our independence, and we won at last.