210th ANNIVERSARY OF THE INDEPENDENCE OF MEXICO 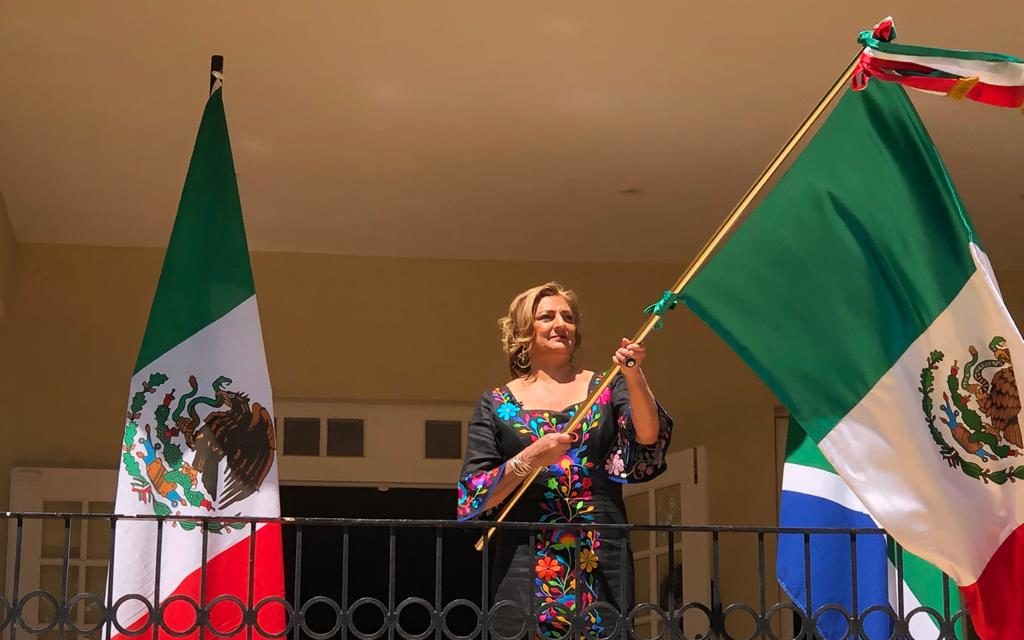 It is with great pleasure I address you all today to celebrate the two hundred and tenth Anniversary of the Independence of Mexico.

Today, as on each fifteenth of September from the late nineteenth century, Mexicans around the world celebrate the beginning of our fight for freedom. With this ceremony, Mexicans renew our bond to sovereignty, to freedom, to Mexico.

In the early hours of the sixteenth of September 1810 Father Miguel Hidalgo congregated the people of his parish in the town of Dolores and encouraged them to join him in the struggle for the freedom of Mexico. Hidalgo’s call became “el Grito de Independencia”, the Cry for Mexican Independence.

For this reason, on the evening of the 15th of September, a very solemn Ceremonia de El Grito (the ceremony of The Cry) takes place to remember our founding mothers and fathers. It starts by stating: Long live the heroes who gave us a homeland and finishes with the shouted wish of Viva Mexico, Viva (Long live Mexico, Long live).

Father Miguel Hidalgo is known as the Father of Our Homeland. He was so ahead of his time that he abolished slavery as early as December 1810.

Another hero was José María Morelos -a brilliant Afro Mexican- who signed the first Constitution in 1814: The Constitutional Decree for the Liberation of Mexican America.

Mexican women from different social backgrounds also played important roles in our fight for freedom such as Josefa Ortíz de Domínguez, better known as La Corregidora (the Councillor”) who utilized the political influence of her husband to gather many of the first group of insurgents; Leona Vicario, an informer who also financed the rebellion with her large fortune; Gertrudis Bocanegra, who served as a courier for the insurgents; and María Ignacia La Güera (“The Blonde”) Rodríguez who inspired Agustín de  Iturbide to negotiate the final peace treaties in 1821.

The new-born State had to evolve looking for its own identity through two monarchies and dictatorships and different central, federal and confederate republics; suffer three wars: one with the U.S in 1847 and two with France in 1839 and 1862; as well as two more civil wars: the War of Reform (1858-1861) and the Mexican Revolution (1910-1917).

Today Mexico is a Federal Republic with well-defined borders and a population that identifies itself within a kaleidoscope of cultures and ethnic groups.

Mexicans believe we are children of maize which we enjoy moulding into more than 600 ways to make tacos, sopes, tlayudas, huaraches or tamales; we combine chilies without rhyme or reason only to give taste to everyday life; we gather together to share pulque, beer, tequila or mezcal; we revere our ancestors; and we explore every corner on earth to have an excuse to celebrate life in a fiesta.

It is this festive spirit too that causes Mexicans, when we are abroad, to like to build bridges with other indigenous traditions and cultures in genuine people to people’s dialogues, conversations and relationships.

If it can be said that diplomacy is the art of dialogue and culture is the environment to reach our common goals of freedom, imagination and nation building, and therefore the Embassy of Mexico works to boost activities of cooperation with key South African partners.

A key partnership in the academic field has proved to be the one with the Mexican Studies Centre of the National Autonomous University of Mexico (UNAM) at University of the Witwatersrand for promoting Mexican culture, fostering academic mobility schemes, and teaching and certifying Spanish as a foreign language.

Mexico and South Africa have a broad spectrum of shared views on the world to address common challenges to promote peace and security, sustainable development and human rights.

In this regard, Mexico and South Africa have been working together to strengthen our bilateral framework through political dialogue that has translated in two high level meetings at the vice-ministerial level since the inaugurations of our current governments: in December 2018 of president Andrés Manuel López Obrador and May 2019 of president Cyril Ramaphosa.

Working together Mexico and South Africa can bring about concrete benefits to our societies, creating innovative solutions in the new normality that will arrive sooner than later when we globally defeat the pandemic caused by COVID-19. 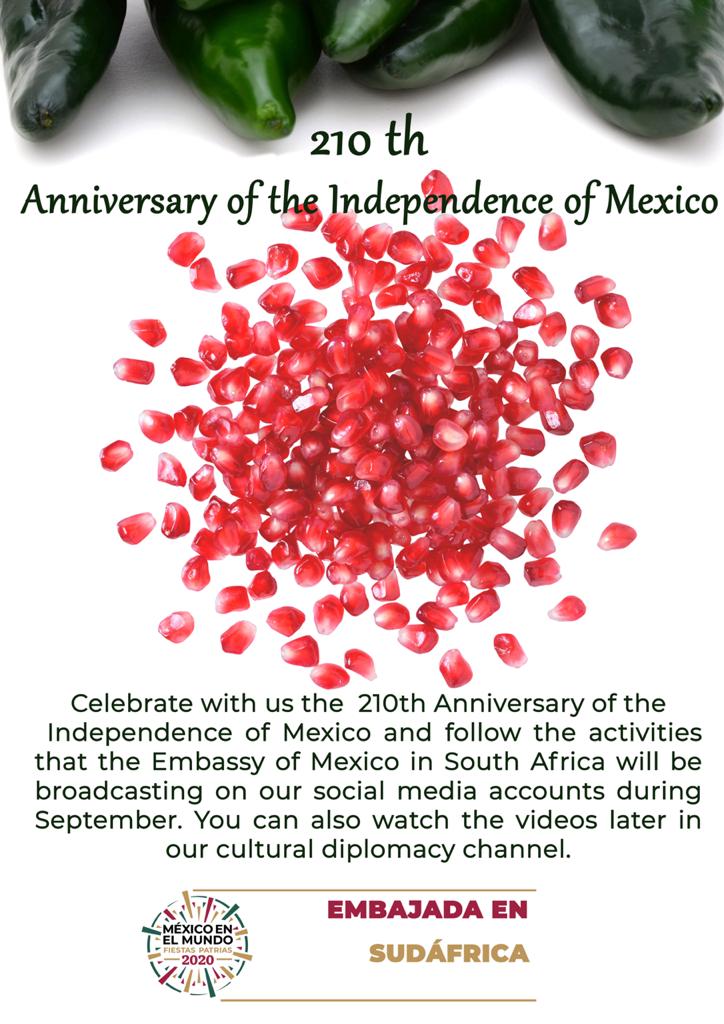 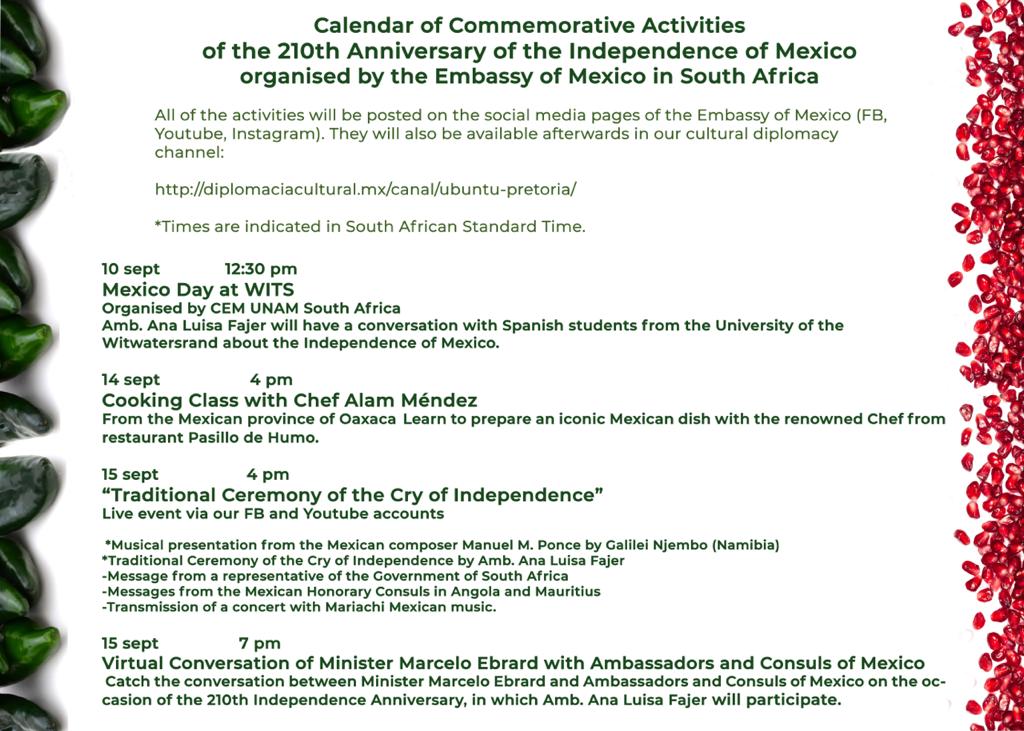 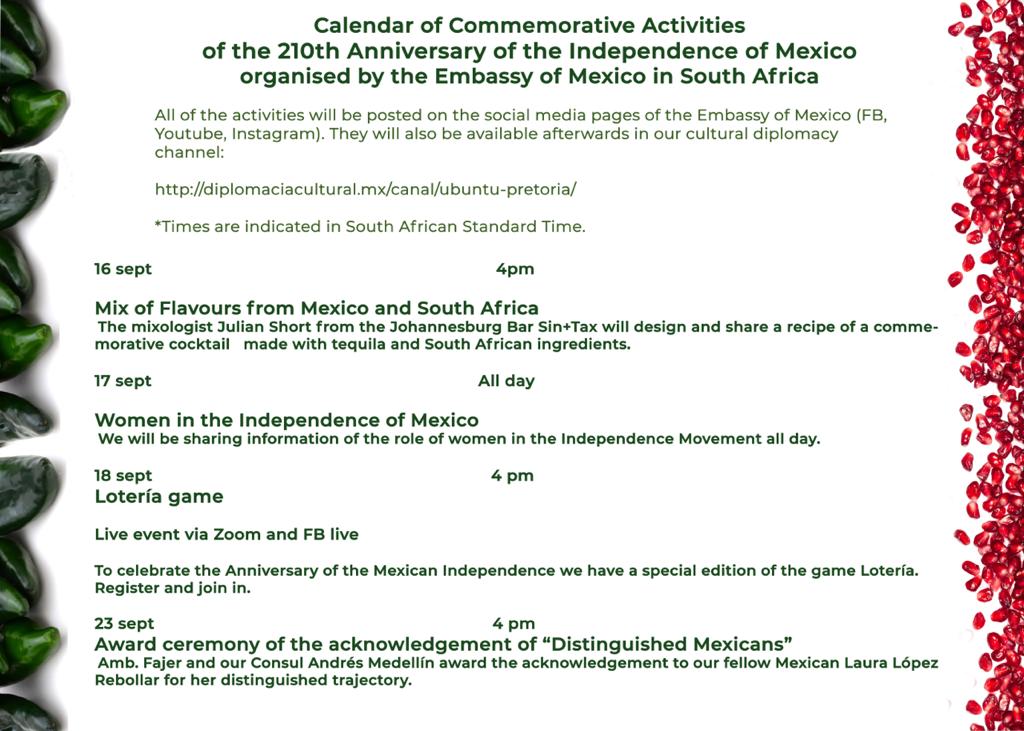 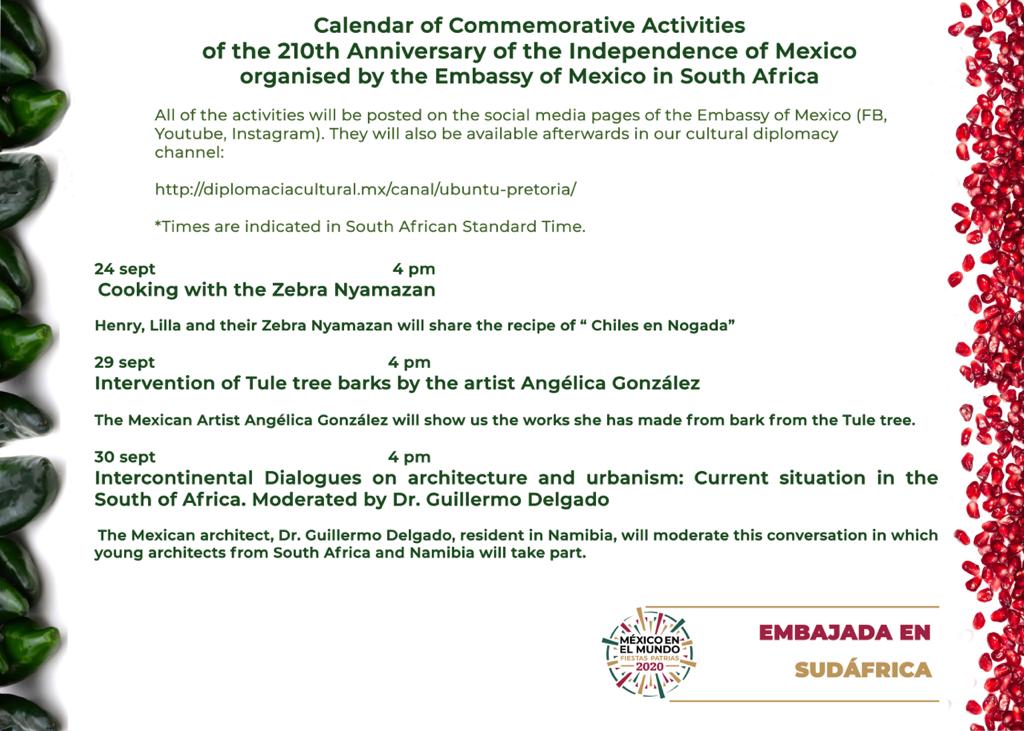