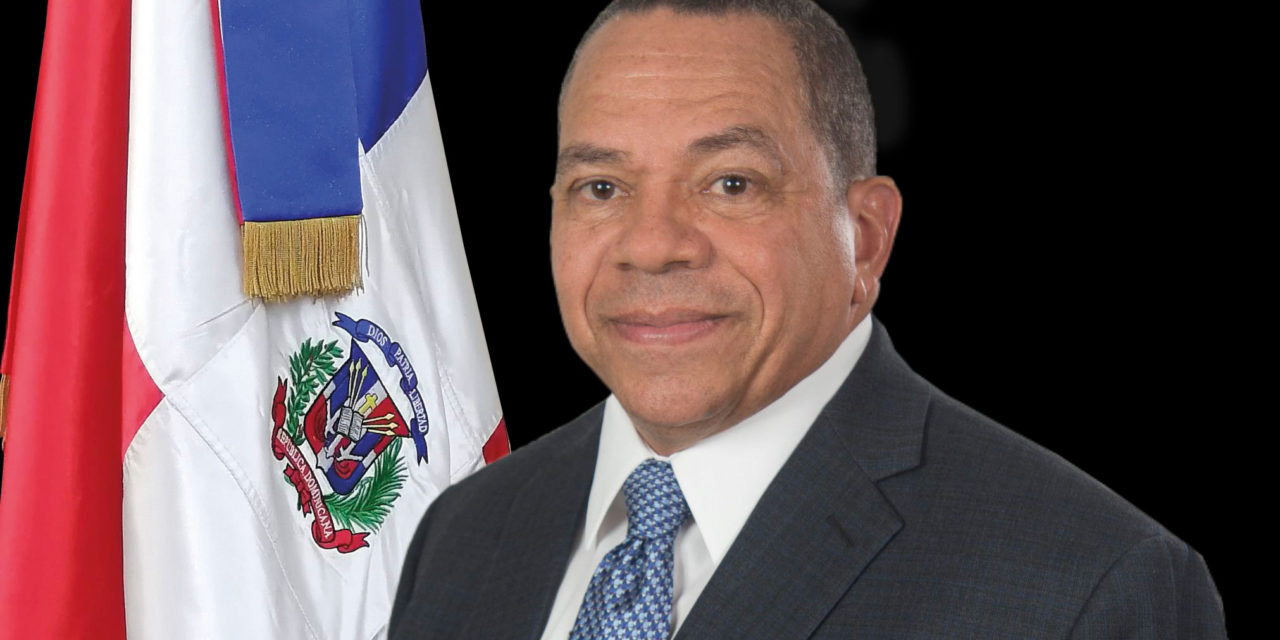 AMBASSADOR OF THE DOMINICAN REPUBLIC

As previously discussed and agreed upon, please find here a number of questions for your kind response;

I arrived in South Africa as Head of the Dominican Mission in March 2019. So I will be close to my second year this March 2021.

So far only in South Africa. But the new administration of the Dominican government that began this past August 2020 led by our President His Excellency Luis Abinader and Foreign Minister Roberto Mr. Alvarez have an interest in expanding Dominican relations with the SADC and African Union countries as well.

We are interested in strengthening bilateral cooperation with South Africa. We want to deepen the agreement with Political Consultations that my country signed with South Africa in 2019. It is important that South Africa can take advantage of the Dominican Republic as a logistics centre to expand into the Caribbean and Central American region. We have free trade agreements and a great international connectivity with 12 international airports, 440 daily flights, 12 ports and 3 cruise ports. We want to export Dominican products to the South African market. And expand our cultural relationships. We want to promote cultural diplomacy so that South Africans know that the Dominican Republic has a lot of African influence including in our smile, music and food.

The Dominican Republic has recently launched the Country Brand in the current administration. There is great potential for ferronickel, medical instruments, circuit breakers, cigars, tobacco leaves, dental floss, and Dominican rum for trade into South Africa. We are confident that soon we will also be able to have cocoa, coffee, green bananas and precious stones such as larimar and amber as well as beautiful pineapple and large Dominican avocados in the South African market.

Geographical distance cannot be a limitation for South African investments into our country. Telecommunications, banking, insurance companies, as well as textile companies can find an excellent investment climate in the Dominican Republic. In our country there is an excellent incentive system in the free zone sector with 100% tax exemption. We have many well-known brands from the US, such as Hanes, Tiffany, Boeing, Adidas, cK, Timberland, Johnson and Johnson, among others, but we are missing famous brands from South Africa.

South Africa, like the Dominican Republic, has many beautiful destinations. Cape Town is excellent. It combines mountains, sea and tourism in the wineries and on the island where Nelson Mandela was imprisoned. The Dominican Republic has a tourism of beautiful beaches, with everything included, as well as ecological tourism and historical tourism. Our capital Santo Domingo is the first city in the New World discovered in 1492.

We are very interested in forming a Dominican-South African chamber with businessmen who want to have more information about the Dominican Republic and the business opportunities it offers for South Africa and African countries, and more especially when starting the Free Trade Agreement of the African Union, in 2021. You can contact the Dominican embassy: dominicanembassy@gmail.com

Although 2020 has been a very difficult year globally due to the issue of the pandemic, it has also allowed us to generate new innovations in the way we can do diplomacy. Through virtual conferences we can be closer in less time. It’s about bringing the positives out of the negatives.

* May you kindly limit your answer to fifty to 75 words per question.

We will require His Excellency to provide us with one or two high resolution photo(s) of yourself, preferably next to your country’s flag.

A Democratic nation, the Dominican Republic has a territory stretching 48,442 square kilometres (18,704 square miles). That’s just over twice the size of New Jersey, or nearly the size of Costa Rica. Its coveted shores face the Caribbean Sea in the south, and the Atlantic Ocean in the north. As of 2017, 6,187,542 overnight visitors and more than 1,100,000 cruise passengers make their way to the Dominican Republic every year.

The Dominican Republic is a Caribbean country that shares the island of Hispaniola with Haiti to the west. It is known for its beaches, resorts, and golf areas. Its terrain includes tropical forests, savannas and highlands, including Pico Duarte, the highest mountain in the Caribbean. The capital Santo Domingo has Spanish-style elements, such as the Gothic-style Cathedral Primada de América, which is 5 centuries old, in its Zona Colonial district.

The culture of the Dominican Republic in terms of its people and customs is nourished by the mixture of Spanish, African and Taino roots. After the Haitian liberation of the entire island, slavery was abolished and those with mixed races spread throughout the island.

Quisqueya, as Dominicans affectionately call their home–meaning “mother of all lands”– is a country of superlatives. This was the first permanent Spanish settlement in the Americas or the “New World,” with the arrival of Christopher Columbus on his first voyage in 1492. Aside from choosing the DR as his sole residence in the region–a land blessed with fertile soil and gold deposits–Columbus and the Spanish Crown used the country as a launching pad for conquests across the Caribbean and United States. Today, the first city of the Americas, Santo Domingo, is the capital of the DR, and continues to thrive while preserving its history and original Spanish architecture.

Aside from historic firsts, the Dominican Republic ranks among the most diverse Caribbean countries in geography, nature, and people. Its landscape ranges from the highest peak in the region, Pico Duarte, to the lowest body of water, Lago Enriquillo. A whopping 6,000 species of flora and 7,000 species of fauna include cacti flowers, endemic hawks, and humpback whales. The country’s cultural make up–Taino, European, and African–includes a diverse population welcomed in the DR since the 19th century, from Jewish and Japanese communities to UNESCO-proclaimed Afro-Caribbean groups.

Whether you choose to visit our shores along our more than 1,600 kilometres (nearly 1,000 miles) of coastline, our verdant mountain towns, our fishing villages, or our cactus-lined landscape, you’ll uncover a unique side of the DR. Along the way, you’ll experience a unified passion for our music and dance–merengue, bachata, and son–our diverse gastronomy taking you beyond rice and beans, our love for baseball, family, and hospitality. Together, they make up the essence of our Dominican spirit.

The economy of the Dominican Republic is the eighth largest in Latin America, and is the largest in the Caribbean and Central American region. The Dominican Republic is an upper-middle income developing country primarily dependent on mining, agriculture, trade, and services. The country is the site of the single largest gold mine in Latin America, the Pueblo Viejo mine.[15][16] Although the service sector has recently overtaken agriculture as the leading employer of Dominicans (due principally to grow for more than $1 billion in annual earnings. free-trade zone earnings and tourism are the fastest-growing export sectors.