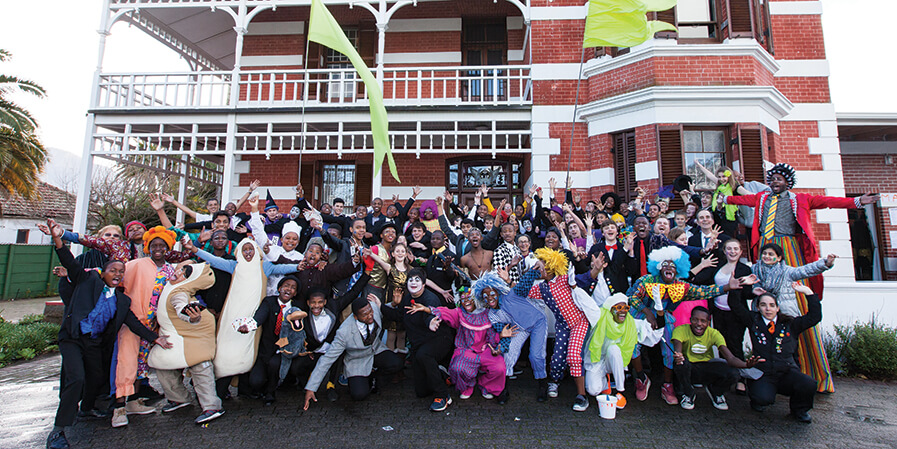 Filmmaking aimed at placing Tshwane on the map!

It started with a six page short story about bridging the divide between people in South Africa, at a time when the divide seemed almost unbridgeable. MAGIC is a story about Walter Dore, a white magician in 1970’s Apartheid South Africa, and his young black apprentice, Kgomotso Maile. It is the brainchild of former Panamanian diplomat and attorney Rodrigo Chiari, and by mid-2017 this six paged dream will have become a full length feature film reality.

The film in question comes at a time when South Africa is becoming more and more sought after as an international filmmaking destination, with the likes of The Avengers: Age of Ultron, Ghandi and Safe House being filmed in Johannesburg, Durban and Cape Town. South Africa’s legislation promotes the creativity of filmmaking, and the country has also signed co-production treaties with top filmmaking countries of the world like New Zealand and the United Kingdom. The weakening of the rand and the immense amount of talent both on and off screen amongst South African industry professionals also allows the country its reputation as a current global filming hotspot.

But while Cape Town and Johannesburg have had their share of international filming, the Capital City has not fully harnessed its potential on screen, despite incredible locations and avid filmmakers who call this city home. This is what Magic hopes to secure, with a setting comprised almost entirely in mid-70’s Pretoria, the film utilises both the workings of the inner city as well as the township scene as its locations. Now is the time for Tshwane, the moment to place it on the movie-making map. In doing so, Magic creates job opportunities for the people of Tshwane while still acknowledge the existing talent already bred in its colleges and universities.

Magic is a story of hope and success amongst characters suffering the hardships of oppression and censorship. It is a tale of friendship across the divide, creating lasting bridges of understanding between people from different walks of life in South Africa. The power of magic is used as the vehicle through which the impossible becomes possible, where miracles unfold in overcoming hurdles that were long accepted as insurmountable.

Walter is a magician, descendant of Irish immigrants, whose family tradition of passing on the art of magic is severed by his son’s refusal to honour the age-old legacy. Walter has to resiliently searches for a protégé outside of his home and eventually comes across a black teenager from Mamelodi township. In the 1970s, the lives of Walter and Kgomotso are so drastically far apart in many ways within the harsh reality of Apartheid South Africa. Racism enforced by the mandate of law. Pass books. And both are forbidden to interact, at all. Walter does the political unthinkable and recruits the reluctant but talented Kgomotso as his new apprentice. He trains his new student secretly but effusively and features him in an end of year showcase which is to form part of the first ever live telecast in South Africa. But things go horribly wrong as Walter’s all white audience refuses to accept the boy.

The event shakes the characters to their core, but they come back to defy the system once again. They seek and eventually find an unexpected venue to show at: Ma’Terror’s The Black Cat shebeen in Mamelodi, where jazz meets the underground and anything is possible. Theirs is a strange act, but the clientele lap them up and it isn’t long before their popularity explodes all over the province. However, the eyes of the apartheid authorities start trailing them too. The Black Cat is raided and things begin to go pear-shaped for the duo. What’s more, Kgomotso has also disappeared. Walter realises that the only way to overcome all odds and rectify any sort of wrongdoing that he has the capacity to rectify would be to go back to where it all started. This ultimately becomes their moment of truth, of history in the making, as they faced those who wronged them in the first place.

One of the most important initial components in filmmaking is its role players.

The initial story written by Rodrigo Chiari was inspired by the characters and plots of three movie classics, Cinema Paradiso, Fantasia, and Karate Kid. He shared the short story with young Swiss filmmaker, Andres Peyrot and together they worked on a treatment. The new version was later shared with British music mogul and writer, Simon Napier-Bell and Etiket Advertising Agency Director, Ricardo Rocha, who agreed that the story was movie material. Chiari met local filmmaker Mickey Dube from One Take Media, a formidable film school graduate from the University of Southern California and former student of Milos Forman. Chiari and Dube decided to pursue the project as producers, and together with Peyrot and University of Pretoria screenwriting Honours graduate, Wayne Smith, they completed the first draft during the three first months of 2016. Magic is expected to be filmed in the final month of 2016 and early 2017. The post-production period that takes place in the UK is set to happen the following three months thereafter, with a planned local release around mid-2017.

Due to a certain amount of Irish influence within the screenplay, a co-production deal is being considered and is expected to be negotiated with a major production company from Ireland. Such a move could hopefully secure a renowned international film director, and one of the lead roles will also be allocated to an Irish credited actor. Acclaimed screen stars are already being approached to play the lead character, Walter the Magician.

Preliminary conversations have been held with United International Pictures for the distribution of the movie in South Africa. UIP has distributed films such as Long Walk to Freedom. Film Festivals are also key players that might help find the right international distribution channels, apart from the first hand exposure that they also allow. The possibility of placing a local movie in the international market increases its reach and provides intangible benefits for South Africa as a filmmaking country. It also improves the film’s chances at the box office.

Another important element of any movie is its music. Apart from the jazz melodies that will be played at the township sheeben, there are also South African vernacular rhythms such as Mbaqanga and Isicathamiya, and international soul themes from the 70’s that will sound the scenes of Magic. New titles like the film’s very own Magic Man will be featured, and musical legends like Hugh Masekela, Malombo, Miriam Makeba and Scottish band Pilot, as well as newcomers Viwe Mkizwana and Eddie Straw, will be included as the movie’s score. Within the film industry it is tradition to produce a memorable soundtrack, and this is the intention for Magic as well.

Renowned African designer Fred Eboka has been approached to design the attire for Magic’s characters, based on the 1970’s fashion movement in South Africa.

Since the first instance, Magic was introduced to Executive Mayor of the City of Tshwane, Kgosientso Ramokgopa. Aware of its potential to promote Pretoria abroad, both as a tourist destination and filming location, the Executive Mayor has endorsed the project and it now has the backing of the City. Other Government offices like the Department of Trade and Industry, the Gauteng Film Commission, the National Film & Video Foundation and the National Lottery all traditionally provide local filmmakers with resources. They are being approached to fund part of this production as well. Additionally, conversations have been held with Gauteng Tourism regarding the marketing of the movie.

Other financial means will be explored and obtained through international and local private investors, sponsorships and placements in order to complete the budget. This economic interaction will secure hundreds of temporary jobs for citizens in Tshwane, as well as the utilisation of accommodation services, catering, communications, rental, set-building and transport services, amongst others, in the Capital City. One of the productions commitments is to include the inhabitants of the township of Mamelodi in the production, either through employment, or through training and skills development workshops in different areas of filmmaking. These workshops will run parallel to production, and will be facilitated by both foreign and local experts. Permanent sets that will be built for the production will also be left behind as landmarks for visitors and nationals to enjoy in the future, as a tribute to the people of Tshwane for believing in magic.

Further support has arisen from academic entities such as the College of Magic in Cape Town and Open Window School of Film Arts based in Centurion, Pretoria. The College of Magic will cooperate in supervising technical expertise and props for the film. It has already played a large role since day one by giving permanent advice from its Director, David Gore, for the writing of the story and the script. The College was founded in the early 80’s during the Apartheid regime and its beginnings could well coincide with the storyline of Magic. Open Window has signed a MoU with Rodway Productions Pty Ltd, allowing both to interact harmoniously. Magic will be their first collaboration together that will formalise into a relationship of important benefits for both. Through these learning institutions, the production team expects to accomplish the educational component of its venture. Through these two collaborations in particular, the training component of the production can formalise.  Members of the community will have the prospect of benefitting from the teachings given at both learning centres. The possibility of having their branches extended to the township in any way will also be explored.

The Philosophy behind Magic

Yes, Magic is about making a movie. But more so, it is about bringing people together in a new filming destination: Pretoria. The Jacaranda City, with its imposing view of the Union Buildings and the rest of its well kept secrets, is waiting to become disclosed to the filmmaking universe. And it is about its people, about finding opportunities and engaging in the trade of the film industry, through training and a new lived experience, behind or even in front of a camera.

The contents of Magic’s story is also one worth telling: a harsh period in the history of the country that cannot be overlooked. The colourful characters that give life to the diversity which represents South Africa and inspired Nelson Mandela to name it the Rainbow Nation. The culture portrayed through different musical tunes of the time which will bring back nostalgic memories to the audience. And the questions remains, what magic has the power to transform? On the shoulders of Walter and Kgomotso lies the responsibility of carrying out this message of transformation. It does not imply a denial of who we are and where we come from but rather involves the search for common grounds in a commitment to making our world a better place. That would be its legacy.